Vote for Your Favorite Performance in V-Sing-Along!

“This song comes from Michael Jackson. The first draft is from r. kelly, a song written by r. kelly after he lost someone close to him in his life, reflecting on a difficult time in his personal life. Michael Jackson loved it and thought it was similar to what was happening in his own life at the time, and together they produced the song, which was nominated for best pop performance at the 38th Grammy awards. The song is well-known and full of mutual encouragement between the producers. During the flu season, it is important to come together and give encouragement and joy to others.”

“We choose this song is because this song is talking about life may not be as you expected, and we are often discouraged by reality. But as long as we remember that we are not alone, we still have friends beside us. We use simple guitar accompaniment to play the melody, expressing the fact that people have the needs of life is very simple, not a lot of advanced and fast. Two people, a guitar, can sing a good song.”

Entry 006: “My Class Will Go On” is created by YANG Ruo Jun and MA Jing Yi from Fung Yiu King Evergreen College. Here’s their message:

“This song we cover is a different version of the famous song—-My Heart Will Go On, with an adapted lyric. The lyric mainly talks about a teacher hopes his students to show up to his class which is carried out in ZOOM, and don’t stop or give up hopes on pursuing knowledge even in the condition of the current situation. The song aims to encourage students to take good care of themselves in the tough special period of time. No matter how tough the outside environment is, students shouldn’t skip their online classes. Even though the virus set us apart, we are still being together when doing the same thing and heading towards the same direction.”

Vote for Your Favorite Performance in V-Sing-Along!

Scoring for The Council Chairman Bowl

Winning entries will gain points for their RCs accordingly and contribute to their total scores in the Council Chairman Bowl 2019/20:

Beside the points gained by respective Colleges in Council Chairman Bowl, the winners of the following titles will also receive additional prizes:

1. Students who do not submit a video may get involved in joining the online voting. “My Favourite Music Performance” is awarded to the entry which has gathered the biggest popularity among voters. Details of voting will be announced in late March.

2. “Most Original Performance” will be awarded to the entry with the highest level of creativity, either in musical performance or online presence. The winner will be determined by the adjudicators.

No scores for the Council Chairman Bowl will be entitled to these two prizes. 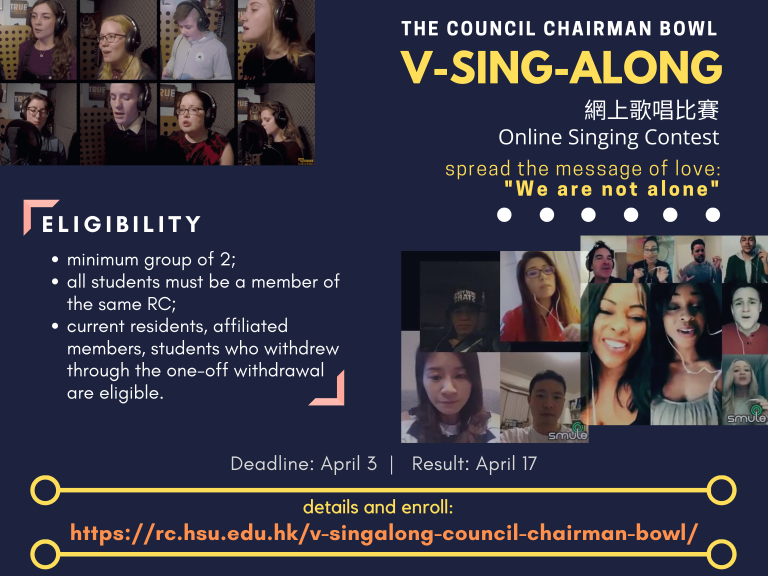